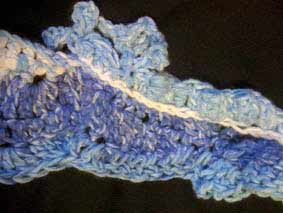 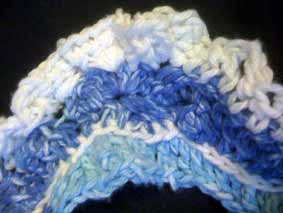 From 0-5 in the life of my firstborn, I was working on her “baby blanket”. It was a knitted blanket and I got the pattern from a dyeing book. I’m fascinated by dyed works, but don’t always have the confidence to tackle them. So I decided that I’d knit this blanket with store bought yarn. It wouldn’t be that hard to assemble a rainbow from the store would it? Ha!

Firstly, I’m allergic to wool, so I knit with cotton, rayon and the like, plus acrylic and other artificial fibres that don’t mimic wool too closely because I’ve gotten an allergic reaction off of some of those as well. sigh Anyhow, good quality (non-dishcloth quality) cotton isn’t cheap. I estimated the cost of this blanket at $500 easy. Way more if you count the yarn I bought when I was in the store getting yarn for the blanket. 8)

So, Tiger watched me knit this blanket for years and years. Eventually she decided she wanted to try knitting too. I had visions of little chubby fists clutching sharpened sticks go running around the room and disaster following so I put this off for a long time, but somewhere around late 4 I gave it a go. As might be expected she quickly lost interest and there was no running around with sharpened sticks (yay!). Off and on over the years we tried knitting and there was never enough attention span to learn the skill until she joined the knitting club at school (the benefits of peer pressure?).

Now, knitting is a skill that I acquired pretty much in parallel with that blanket. I remember trying somewhere in my tween era and failing dismally, but crochet was always something I could do. Thus in my mind crochet is easier than knitting and quick to pick up.

A couple of years back (when Tiger was 8 or so), when amigurumi was picking up steam I figured my cute-loving offspring would enjoy this movement and I should be able to teach the skills she needed to participate. bzzt! No luck there.

I tried again later with a Klutz Crochet book/kit

in the hopes that the author had some insight into teaching children that I didn’t. This also didn’t work.

For a while now I’ve been thinking it’s me. Something prevents me from sharing my knowledge, especially with my kids. For some cosmically unjust reason I need to pay other people to give my kids the skills I should be able to freely share. But then, at least in this case, I had a breakthrough. I had just discovered Prudence Mapstone’s (free form knitting and crochet (scrumbling) pioneer/evangelist) new blog. Now, as anyone trying to learn a new skill will tell you, it’s disheartening to attempt something and not end up with something even close to what is in the picture. But with scrumbling, there is no wrong way to do it. You could never point to anything and say “that’s an error” or “that was a mistake” it all just adds more texture. So, I went and dug out my The Crochet Workbook

and showed her the pretty pictures.

“See how cool it all is?” “Anything you do is fine!” “There’s no way to make a mistake.” And it worked. She DCs like gangbusters now and occasionally breaks into a fringy bit on whim. I showed her ruffles and she’s experimenting with those too.

She pointed out that her 2 siblings (7 and 5) don’t have their baby blankets yet. sigh I mentioned that I was thinking of scrumbling their blankets and have a few patches so far and she’s offered to help. 8) Maybe we can finish them before anyone else turns 10. 8)